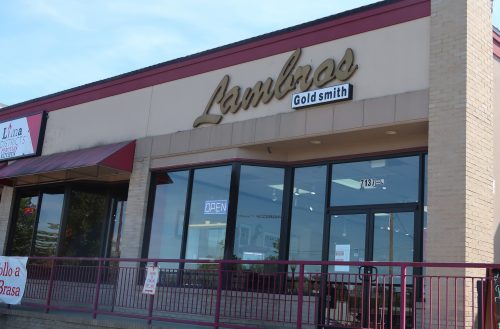 Lambros Goldsmith is one of the oldest continually operating businesses in Annandale, and owner Lambros Magiafas shows his appreciation for the community by signing on as a Diamond-level sponsor of the Taste of Annandale, a street festival on Oct. 5.

That’s only fitting, as Lambros Goldsmith sells fine jewelry with diamonds, as well emeralds, rubies, sapphires, chalcedony, and other precious stones.
Lambros is an artist who creates exquisite, one-of-a-kind pieces inspired by ancient designs from his native Greece, as well as modern pieces that reflect the popular styles of today.

Lambros is a four-time winner of the Jewelry Design Competition sponsored by the East Coast Jewelers’ Association and has multiple designs on display at the Smithsonian Museum in Washington, D.C.

He began learning his craft at age 12 as an apprentice to a jeweler in Crete. After immigrating to the United States as an adult, he settled in Annandale and opened Lambros Goldsmith in 1987. He eventually established jewelry stores in D.C., Hawaii, and Alaska, but the Annandale location, at 7137-C Little River Turnpike, remains the flagship store.

Anyone searching for a beautiful, truly special gift for an engagement, birthday, anniversary, or other special occasion is sure to find something truly special at Lambros Goldsmith, one of Annandale’s not-so-hidden gems.