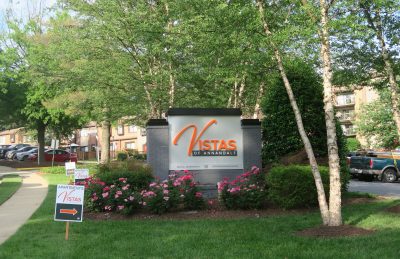 The Vistas, an attractive, conveniently located community of 1,065 garden apartments and townhomes behind the Heritage Mall shopping center, was a Silver sponsor at last year’s Taste of Annandale. This time, the community is upping its commitment to the Diamond level.

“We want to make sure people know we’re not just a business; we’re part of this neighborhood,” says Pamela Marquez, sales director at Ross Cos. “We want everybody to have a good living experience.”

“We’re thrilled we’ll get to have a larger space at the Taste of Annandale” and will have more giveaways for the public, says Dawn Miller, vice president of marketing at Ross Cos.

“We want people to know we’re a different community than before,” Miller says.

Ross took over management of the complex just over a year ago. Before, when it was known as the Avant, it was in less than ideal condition and was just 88 percent occupied. Now it’s up to 96 percent, and some former residents have moved back in. “It’s been incredible what a difference a year makes,” says Miller.

The Vistas of Annandale has been transformed into a livable, desirable community with lots of amenities – including a pool, clubhouse, fitness center, and playground. There’s a social event every month and a farmer’s market in front of the leasing office every Monday 1-7 p.m.

Much work was done on the grounds, and “our curb appeal has increased tremendously,” Marquez notes.

During the summer, the Vistas of Annandale is a host site for Fairfax County Public Schools’ free summer meals program for kids. During the school year, the community has a free summer tutoring program for students in its business center.

The Vistas of Annandale partnered with residents of other nearby communities for a cleanup drive along Americana Drive in February in the wooded area next to the beltway sound wall. That area has been kept mostly free of litter, discarded furniture, and construction debris since then. “When people see it’s been cleaned up, they want to keep it clean,” Miller says.

“We would love to do more,” she says. “If there are more cleanup opportunities, we would be all in.”

“We really do want to be good neighbors to everyone in Annandale,” she says, “and that’s why we’re looking forward to being a part of the Taste of Annandale.”